This is one of the best Santa short stories for kids. Christmas was just a few days away. The North Pole was buzzing with activity. The reindeer were practicing their take off and the elves were putting finishing touches on the toys with lots of help from Mrs. Claus. Santa looked tired. “We need a little break,” he said. “How about a song and dance to get us going?” asked Mrs. Claus. Music and laughter rocked the workshop but something wasn’t right. Something was missing. Santa was quiet.

“What is it, dear?” asked Mrs. Claus. “Have you lost something, Sir?” asked an elf. Santa scratched his head. He cleared his throat. “You could say that,” he said. “What is it?” asked the elves. “We’ll help you find it!” Everyone waited for Santa’s answer. “I think I’ve lost my laugh,” he said. Everyone gasped. “Oh, no! Santa had lost his Ho, Ho, Ho!” This was serious. How could there be Christmas without Santa’s Ho, Ho, Ho! Also, read Santa’s Christmas. 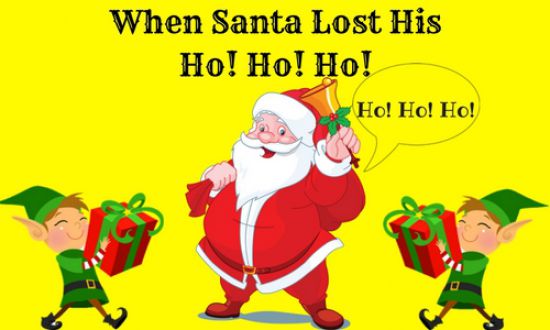 Santa tried some home remedies, they didn’t work. He went to see Dr. Diggy. The doctor prescribed funny movies and a large dose of jokes. Everyone was eager to help. But the best Santa could manage was a little ‘Ha, Ha,’ a weak ‘yippee,’ and a faint ‘yee ha!’ But no Ho, Ho, Ho!

The local paper broke the news. Reporters and photographers gathered outside Santa’s workshop. This story was big! All around the world, people heard the news!

Back at the North Pole, the elves and Mrs. Claus kept trying to help Santa Ho, Ho, Ho! Nothing worked. The reindeer even offered a surefire remedy- cocoa! Santa enjoyed it but his laugh was a no-show. Santa decided to check his mail. He always read every single letter himself. But he’d been so busy trying to Ho, Ho, Ho! that the mail had really piled up. You may also like to read, The Christmas Santa Almost Missed.

Mrs. Claus noticed that Santa looked tired- even a bit cranky. “Mr. Claus,” she said, “Please, take a nap! We’ll organize your mail . Now scoot!” “Well, maybe just a few winks,” Santa said. Santa settled in for a short winter’s nap. Mrs. Claus and the elves got busy. They opened the mail. They sorted it and put it into neat stocks. “Look at all these wonderful letters!” said Mrs. Claus. There were all some unusual gifts.

Mrs. Claus held up a drawing from a girl named Holly. “Look at this one!” she exclaimed. The elves and Mrs. Claus laughed until they cried. “I’ve an idea!” said Mrs. Claus. “Gather the letters and follow me to the workshop. We’ll have lots of room up here!” Mrs. Claus told the elves. “But hurry! Santa will be awake soon!”

Santa awoke from his nap feeling much better. But there was still no sign of his Ho, Ho, Ho! He heard giggles coming from the kitchen. “Sounds like everyone’s having fun!” said Santa. “I’ll join you after I read some letters.” “You mail is in the workshop, dear,” said Mrs. Claus. “So, you can sit in your favorite chair when you read,” said the postmaster elf. “Great idea,” said Santa. Soon, Santa headed for the workshop. Also, read How Santa Got His Job.

The elves and Mrs. Claus waited by the kitchen window to watch and to listen. One minute passed, then two. It was so quiet, you could hear a snowflake fall. “I don’t hear a thing,” Mrs. Claus tsked. “It’s not working,” moaned the postmaster elf. Then, there came a faint rumble, a distant chuckle, and finally a mighty, booming, very familiar and so jolly Ho, Ho, Ho! Santa’s Ho, Ho, Ho! was back.

The reporters and photographers heard it. Folks in town heard it. Everyone, everywhere around the world heard it!Mrs. Claus jumped for joy. The elves shouted with glee. The reindeer pranced and danced. Santa thanked everyone for pictures- especially Holly. He promised that would be the merriest, jolliest Christmas EVER . And it was. You may also like to read, Story Of Santa Claus.

Here is a short visual depiction of one of the best santa short stories “When Santa Lost His Ho! Ho! Ho!“. See the video story below,