When You Wish Upon a Star

When You Wish Upon a Star is a song written by Ned Washington and Leigh Harline for Pinocchio by Walt Disney in the year 1940. This song was originally sung by Cliff Edwards in his character as Jimmy the Cricket in the movie. Ever since then, this song has been associated with the Walt Disney Company. A recording of the song along with the chorus was released by Victor Records. Another version, a cover version was released some time later as well.

This song was ranked among 100 Greatest Songs in Film History by American Film Institute. It was also the first Disney song to win an Oscar. When You Wish Upon a Star along with Mickey Mouse has become an icon of Disney as a whole. There have been many artists who have performed this song, and this song has had many translations. Nowadays, it can even be used as a lullaby. The children enjoy the soothing melody of this song and has become one of the favorites.

When You Wish Upon a Star 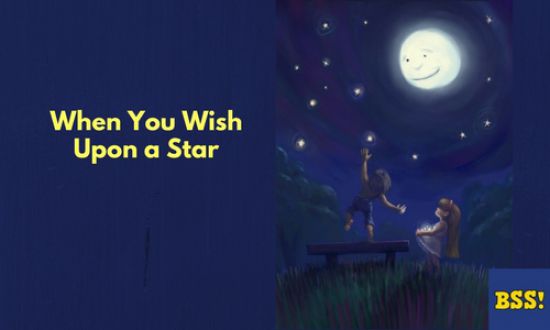 Makes no difference who you are,

Anything your heart desires,

Will come to you

If your heart is in your dream,

No request is too extreme,

When you wish upon a star,

She brings to those who love,

The sweet fulfillment of,

Fate steps in and sees you through,

When you wish upon a star,

In this song, the main lesson is that, that every wish can come true. The first stanza says that it does not matter who we are when we wish upon a star. It says that whatever the heart desires will be given to you. Furthermore, the song speaks of the intensity of our dreams. Also, read Baby Mine.

Fate will come to those who dream, those who love with all their hearts. And to all those people, Fate will be kind and will bring them the sweet joy of a fulfilled dream. Fate will give them what they deserve and desire. And as something happening out of the blue, Fate will make sure your dream is fulfilled. You may also like to read, Cuppy Cake Song.

All dreams will come true, if only we believe in our dreams. And if only we wish upon a star!