This is one of the amazing short Christmas stories for children. Christmas was just around the corner. The toys were wrapped. The lists were checked. Santa’s sleigh was polished and ready to go. “Let’s visit the reindeer!” said Santa to Mrs. Claus. As they approached the stable, Santa called out, “Hello, Dasher, Dancer, Prancer, and Vixen! Hello, Comet, Cupid, Donder, and Blitzen! Are you ready to fly?” “The answer was a loud AHH-CHOO!”

“Goodness gracious!” exclaimed Mrs. Claus. The reindeer looked miserable. Santa rushed off to tell the elves. “The reindeer are sick! Who’ll pull the sleigh?” he asked. “We need a backup plan!” Santa paced up and down. He scratched his head and looked serious. Then he had an idea. “We’ll find stand-ins!” he said. Also, read The Christmas Santa Almost Missed. 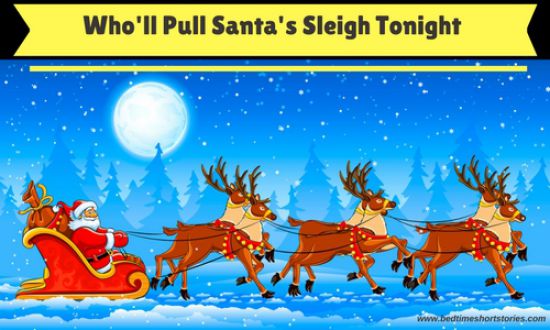 The auditions were announced. A large crowd lined up to try out. The performers were very unusual, so were their acts. None was right for the job. Poor Santa cried, “Who’ll pull my sleigh?” Santa went to his workshop. He thought and sketched. He thought some more. Then, he had an idea!

“Here’s my new plan!” said Santa. There were a few grumbles and groans. But Santa and the elves went to work. They worked hard and fast. At last, they finished. “We did it!” shouted Santa. “Let’s show Mrs. Claus!” It was the biggest idea Santa had ever had. Santa prepared for a test flight.

The balloon went UP, UP, UP! Soon, the balloon came DOWN, DOWN, DOWN with a Pop! The balloon was deflated and so was Santa. “I’m all out of ideas!” he sighed. “I will bring you a cup of hot cocoa!” said Mrs. Claus.Santa sipped the cocoa. “Ahhh!” he said, “This always makes me feel good as new.” Santa and Mrs. Claus looked at each other. “I have an idea!” Santa said. “Do you think . . . ?” “Yes, I do!” she finished. You may also like to read, How Santa Got His Job.

Santa and Mrs. Claus took a big pot of cocoa to the reindeer. “I hope this works!” said Santa. As the reindeer drank hot cocoa, they stopped sniffing. They looked much better. Immediately, they were ready to fly! “Hot cocoa saved the day!” Mrs. Claus said. Everyone cheered as they flew out of sight. Santa happily left with his reindeer and made everyone’s Christmas merrier.

Here is a short visual depiction of one of the great short Christmas stories for children  “Who’ll Pull Santa’s Sleigh Tonight“. See the video story below,