Why Do We Celebrate Halloween ?

This is a short story on Why Do We Celebrate Halloween. Hundreds of years ago, the Celtic people or the Celts lived in regions that are now Ireland, Britain, and Northern France. This was long, long back, even before the birth of Jesus Christ.

The Celts had a tradition of remembering those who had died and keeping the evil spirits peaceful. They did this every year on 31st of October and it was called Samhain. They believed that the night before New Year (31st October) when the living and the dead came together. But their practices were opposed to the Christian way. You may also like to read, The Witch Who Was Frightened Of Halloween. 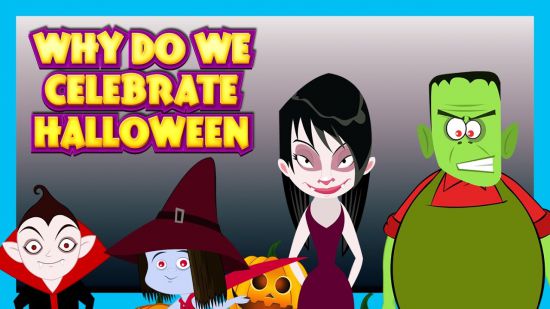 why do we celebrate halloween Image Source@ www.youtube.com

Hence, nearly 700 years after Jesus Christ, the head of the Catholic Church moved an important Christian Day, the All Saint’s Day to 1st of November. He thought that everyone would forget about Samhain. All Saint’s Day is a Christian festival in honor of all the saintrs in the heaven. Earlier, it was celebrated on 1st of May.

On the day of Holloween, dressing up as spirits and ghosts became a part of the All Saint’s Day celebration because the people who celebrated Samhain believed that wearing scaring constumes would scare away the evil spirits and keep them away.

The pumpkins in the Halloween also considered as a Holy symbol which people love to carve every Halloween. People carve the pumpkin and keep it outside their homes to ward off the evil spirits. Some people would carry lanterns made of turnips. Some of them began putting candles inside the pumpkins and use them as lanterns. That’s the reason we all see Jack O’ Lanterns today!

Children dress up in scary constumes and they go from house to house. They knock on doors and say, “Trick or Treat!” The owner of each house gives candy or something special to each trick or treater. Also, read The Cursed Doll.

Here is a short visual depiction of “Why Do We Celebrate Halloween”. See the video story below,

Why Do We Celebrate Halloween Story Video