Why The Sky Is So High?

This is one of the great bedtime stories for preschoolers to read. Once upon a long time ago, the sky had not ben as high as it is now. The sky had been so low, that you could touch it with your bare hands.

In a small village where the sky was the lowest, lived an old woman in a hut. She lived all by herself and did all her chores all on her own. “So much work to do,” she would say as she went about doing her work. She would clean the dirty courtyard, wash the dirty utensils, wash her clothes and hang them out to dry. Also, read Tale Of The Sun And The Moon. 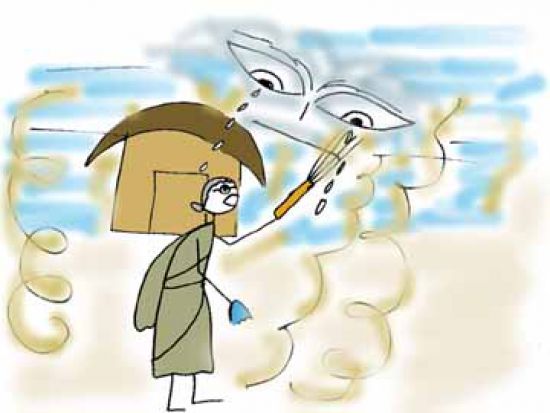 Then one day, as she was cleaning her small hut she saw that her courtyard had become extremely dirty. so, she picked up her broomstick and began sweeping. She swept and swept and then swept some more making the dust dance around. You see, for some reason, a lot of dust had accumulated in her courtyard and as the old woman swept her courtyard the dust began to rise.

Soon, the entire village of hers was filled with dust. Dust here, dust there, dust everywhere. As a result, all the people in the village coughed and wheezed due to the dust. Soon enough, the dust became so dense that they could not even see properly. But the old woman did not stop. The more she swept, the more dust swirled around.

With the rising dust, the sky began to choke. The dust pricked his throat, his eyes began to water. The poor sky could not take it anymore. And so, the sky sneezed. A mighty great sneeze it was, shaking the entire world with it! The people covered their ears and ran inside. But the old woman still did not stop. She kept sweeping and sweeping to no end and the dust kept rising. Also, read The North Wind And The Sun.

The dust kept bothering sky. It still pricked his eyes and throats. And then came the raindrops. Big, gigantic raindrops. Plip, plip they fell. The old woman paused to glare at the sky. “Stop the rain this very instant!” yelled the old woman, but the poor sky had no control anymore. The rain kept falling as the old woman kept screaming. Then, in a fit of blinded anger, the old woman whacked the sky with the end of her broomstick. The sky sneezed and got away from her. But the old woman kept hitting the sky. The more she whacked him, the more he sneezed and went higher.