This is one of the most amazing fairy tales to read for kids, “Wild Swans“. Once upon a time, there lived eleven brothers and one sister. There were eleven Princes and one Princess was named Eliza. In the same castle, an evil queen lived along with them. She was actually a witch. She used to hate Eliza and the eleven Princes. The queen did not want the little ones at the castle. She thought, “I will make them go away!”.

She cast a spell, “Abra Ka Dabra!” She kept saying these words until all the eleven Princes became swans. All the little Princes were now swans and they sounded like swans. The queen went to Eliza and made her face black with her black magic. Eliza went to the lake and started to wash her face. Her face became as beautiful as before. 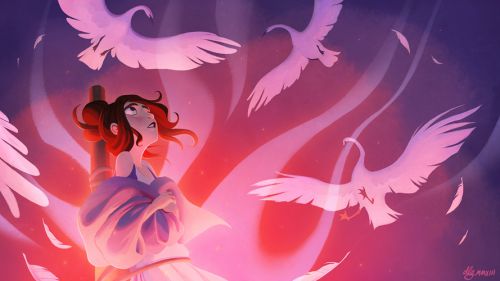 The swans came to know where the Princess was. They flew to the lake. After the sunset, all the swans became Princes again. “Oh, there you are!” Eliza said happily. The next day, when the sunrise took place, all the Princes again became swans. They flew in the sky with Eliza and arrived on a mysterious Island. Suddenly, an angel appeared and said, “If you make nettle shirts for your brothers, they will become Princes again! But you cannot speak to anyone while you make the clothes.”

Eliza was a dedicated sister and so she gathered the nettle and started to make the shirts. Her hand started to bleed but she thought to herself, “I will do it for my brothers!” In the Island, a handsome king was passing by where Eliza was sitting. He immediately fell in love with the beautiful Princess. He asked, “Will you marry me?” She noded without saying anything. The king and Princess Eliza got married. But people thought that their new queen was strange.

“Queen Eliza only makes clothes all day! Maybe she’s a witch!” the people wondered. The people of that kingdom wondered that she was a witch and so shouted at her to leave their Kingdom. She thought, “I just want to finish making the clothes.” Finally, she finished her work. After she was done, she threw the nettle shirts to the swans. All the swans became Princes once again. The Princes were at last free from the witch’s magic. After that, Eliza could finally speak. They all lived happily ever after.

Here is a visual depiction of this amazing fairy tales to read for kids, “Wild Swans“.See the video story below,