This is one of the awesome adventure bedtime stories for kids. Totum was a very simple and innocent boy. He was always getting into trouble with his father. No matter how hard he tried, he could never make his father happy. His two elder brothers used to tease him a lot about this.

Totum’s father was a rich merchant. He used to send ships laden with Indian spices and silk with fine gold and silver embroidery to countries all over the world. Totum’s brothers accompanied the ships to distant lands. Totum used to see his brothers leave in ships laden with rich and expensive things while he was made to stay at home. This used to make him sad. He too, wanted to visit different places. Also, read The Boy In The Paper Boat. 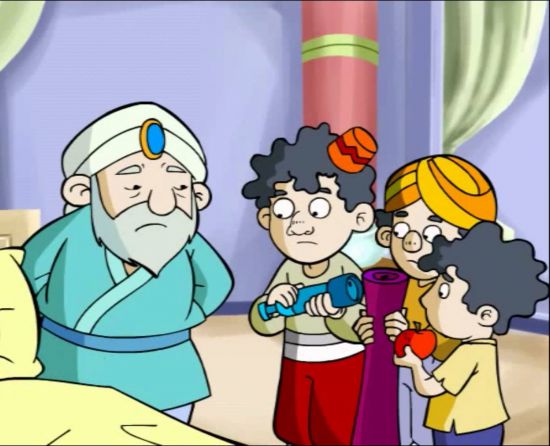 Image Source@ shortstoriesforkidsonline.blogspot.in. One day, he asked his father for a ship. He promised to bring back double the amount of money by selling his wares. Totum’s father didn’t believe him. “How could somebody who is good-for-nothing sell his products for double the money,” he thought loudly to himself. Totum’s mother heard him. She was a very soft-hearted lady. She persuaded Totum’s father to give him a ship so that he could do as he wished.

Totum was given an old ship. The sails were torn and the mast had rusted and become weak. The cargo consisted of five big drums of salt because that was the cheapest thing available. The crew of the ship comprised of old, unskilled dockhands. Totum happily set sail in his own little ship. They sailed on the sea for three months.

One day, as Totum was standing at the deck, he saw a strip of land far away. Totum ordered the ship to be steered in that direction. Also, read Long, Broad, And Sharpsight.

Next day, the ship anchored at the harbor of the prosperous town of Philwagarh. It was a small town. The people were very friendly. Totum went to the local market. The shops were small but very neat and clean. The shopkeepers took great pride in showing off their wares to their customers. Totum bought small gifts for his family. He enjoyed himself thoroughly. It was the first time he had traveled so far away from home.

It was evening time. Totum started feeling hungry. He and all his crew members sat down to have dinner in a small restaurant. As soon as they put the first morsel in their mouth, they realized that there was no salt in the food. The food was tasteless. When Totum asked for salt, he was surprised to find that people in this place didn’t know anything about salt. Totum went to the ship and got some salt from one of the five big drums his father had given him.

The next day, Totum was invited to the King’s palace for dinner. As they sat down for the meal, Totum remembered the salt and put some of it in his soup. He then offered the salt to the King. The King and the Queen got excited. When they tasted the soup with the salt, they loved the taste. The King wanted to buy all the salt that Totum had.

“How much did you expect for this white substance you call salt?” he asked. Totum thought for a minute and replied, “My Lord, give me gold coins double the weight of salt.” TheKing was very pleased with the answer. He thought that Totum was being extremely foolish in selling this precious white powder so cheap. He immediately asked his ministers to arrange for the unloading of salt and to give double the weight of salt in gold coins to Totum.

Totum then returned to his homeland with double the weight of salt in gold coins. Everyone was surprised to see that Totum had made a lot of money through salt. Now, Totum had become a useful member of his family at last! Also, read The Adventures Of Brave Eagle.

Here is a short visual depiction of one of the adventure bedtime stories “Wise Totum”. See the video story below,