Yankee Doodle Song is a well know American song. This song is often sung patriotically and is the State Anthem for Connecticut. The earliest versions of this song go back to the Seven-Year’s war and the American Revolution. The melody of this song is even older than the song itself.

The word “Yankee Doodle” first appeared in a Middle Dutch harvest song in around the 15th century. This particular song was pretty much a nonsensical song, with English and Dutch words. The word “doodle” appeared around the same time period from a low German language, roughly meaning “playing music badly” or “a foolish person”.

This song originated during the Revolutionary War period. “Doodle” was a term used by the English troops to make fun of the Americans with whom they were serving the French and the Indian War. This is also popular among the Americans as a song of Defiance. Also, read Ten Little Indians Poem. 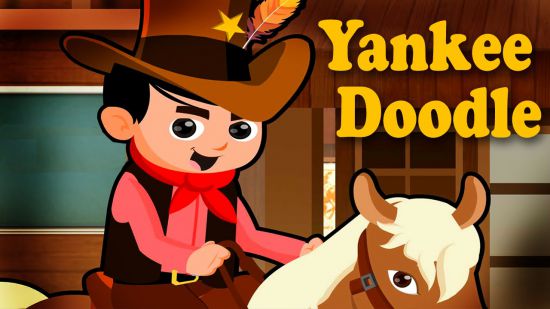 Riding on a pony,

Stuck a feather in his hat,

And called it macaroni.

Yankee Doodle keep it up,

Mind the music and the steps,

And with the girls be handy.

Father and I went down to camp,

Along with Captain Gooding,

And there we saw the men and boys,

As thick as hasty pudding.

Yankee Doodle keep it up,

Mind the music and the steps,

And with the girls be handy.

The poem begins with Yankee Doodle coming to town riding a pony. Yankee Doodle put a feather in his hat and called that macaroni. Now, “macaroni” was a term used to define something as extremely fashionable.

In the next stanza, the poem tells us that Yankee Doodle was praised and is encouraged to keep doing what he is doing. “Yankee Doodle Dandy”, a phrase used by the British meant unsophisticated misappropriation of high-class fashion. Further, the poem encourages Yankee Doodle to dance as he wishes and not to mind the music. And also that all the girls should be within reach.

Further, the narrator of the poem says that he went to the camps with his father and a captain called Captain Gooding, and saw all the men and boys as thick as hasty pudding. This indicates that the narrator saw all of them together in a small place.

This was composed by the British soldiers mostly to mock the disorganized American soldiers. You may also like to read, Ding Dong Bell.