Zeus and the Potsherds

This is one of the great Greek mythology stories for kids. Long ago, during ancient times, Zeus, the king of Gods called for Hermes. Hermes, the son of Zeus and the known messenger to all Gods came running at once.

“Father you summoned me?” he asked Zeus. Now, Zeus was well aware of humans and the misdeeds. Zeus wanted to punish all those who wrong doers. “Hermes,” he said, “there is something I’d like you to do for me. It is a rather urgent and tedious task”. Hermes, ever eager to help asked what this task was. You may like to read, The Story Of The Phoenix. 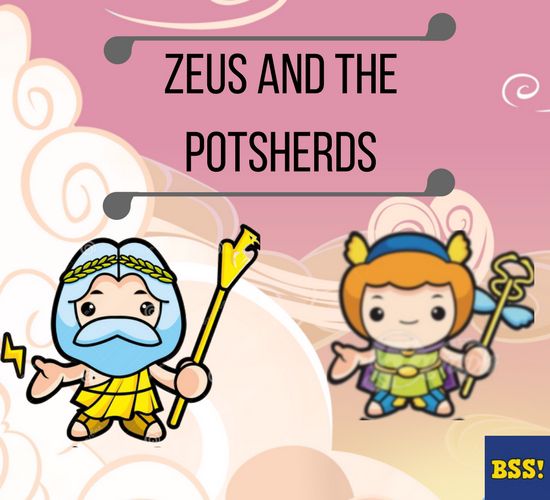 “You have the important job of creating a list,” explained Zeus. “This list will comprise of the names of all those people who are indulging themselves in misdeeds. And also, you have to write down what it is that they did wrong.” Hermes agreed, but he had a question. “But,” he said, “Where do you want me to write down these names and wrong doings of the men?”

“Write the down on potsherds,” Zeus ordered. Now, in those times, the paper had yet to be invented. People in olden times used potsherd to write things down. Potsherds were small pieces of a broken clay pot. “And what shall I do with the potsherds once I am done writing the names?” asked Hermes. “Pile them up and put them in a box. I shall do the rest,” Zeus informed Hermes. “I will carefully look at their names and deeds. Then, I will punish them as I see fit”.

And so, the tedious task of writing names and deeds began. There were many men and even more misdeeds. Hermes did exactly as he had been instructed. Then, Zeus picked up each and every potsherd and punished the wong-doers. And since, there were many, over the years it became common knowledge that some men might receive their punishment earlier than others. Also, read Why The Sky Is So High?

MORAL OF GREEK MYTHOLOGY STORIES: JUSTICE WILL PREVAIL OVER MISDEED.